In spite of the frosts  that we have been having,  there are still flowers in the garden which don’t seem to mind the low temperatures. A lot of the flowers that we had last month, which were flowering out of season,  have now been burnt by the frost,  japanese azalea, quince, mahonia and Choisya ternata. Most of the plants that are  flowering at the moment are in the woodland, which does give them a certain amount of protection from the weather. The snowdrops that are in this photo are the wild Galanthus, the doubles are flowering nicely but the singles at the back are only just coming out, not sure why they are so late. It’s not just my garden where this is happening, a friend tells me that her wild singles are only just coming up whereas her doubles have been flowering for a while now. 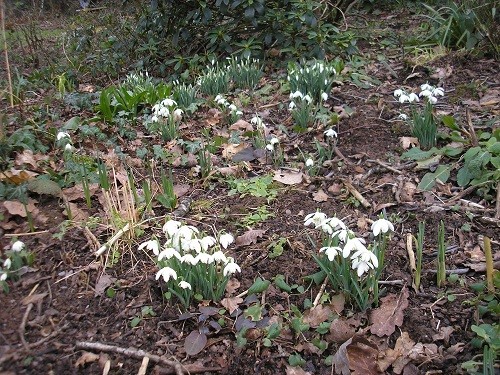 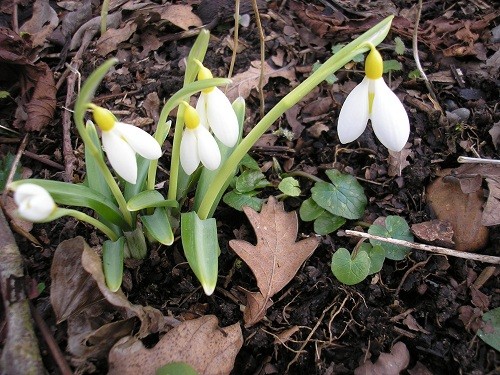 I wasn’t going to say much about snowdrops, having written 2 posts about them, which I think  is enough, however this is Wendy’s Gold which is still one of my favourites, and all the flowers are now open so I thought it deserved to have it’s photo taken.  Other colours are now starting to join in with the white that is everywhere, making the woodland a really interesting place to visit each day, to see what else has opened its flowers. 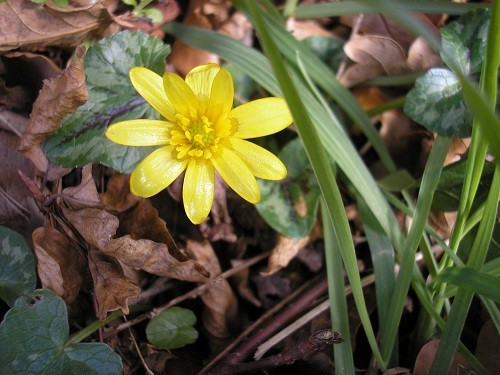 Shining out of the darkness is a wild Celandine, later I will be getting fed up with them and consider them a weed, but at the moment, when there is just one, it is welcome. 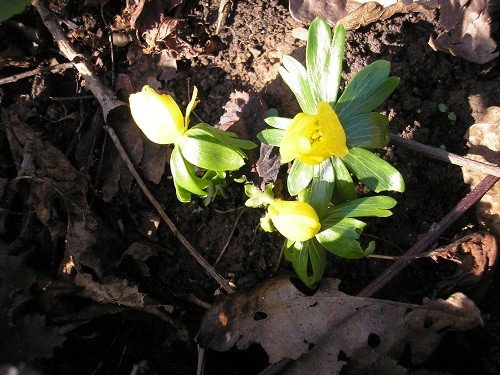 The winter aconite, or Eranthis hyemalis is as early as the snowdrops, I think it prefers a more alkaline soil than mine, this is the only one of 3 that I bought that is still surviving. It has been here for a few years now but doesn’t show any sign of increasing, I’m just glad that it is still alive!

This is one of the Hellebores that I bought when we visited R.D. Plants the other week, I think it has beautiful markings. 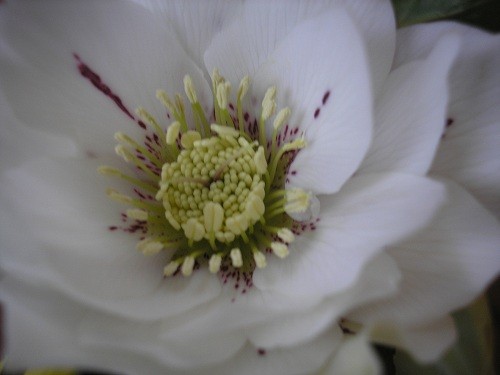 Another of my new hellebores, will write a post about hellebores next time, so will leave it at two examples for this post. 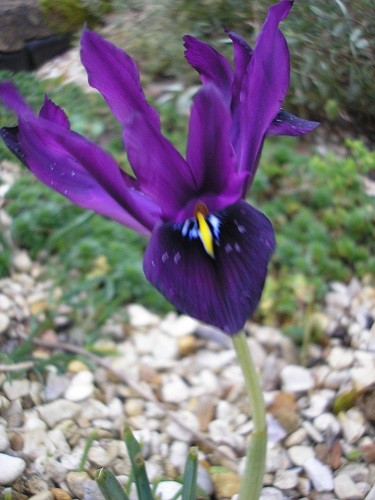 It always amazes me when Iris reticulata puts up its flowers in such cold weather, this one is Pauline, sorry but I had to have it! 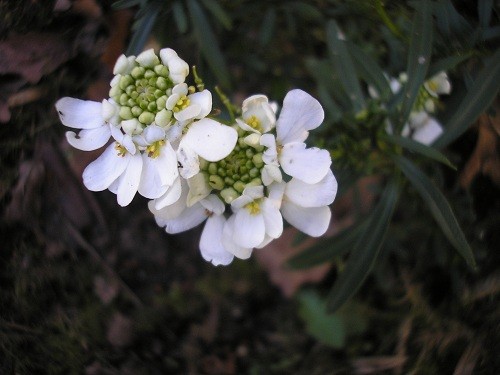 Still flowering in spite of the frost. This started flowering in January when we had a very mild spell, but I thought the frost would have finished it off by now, wrong!! 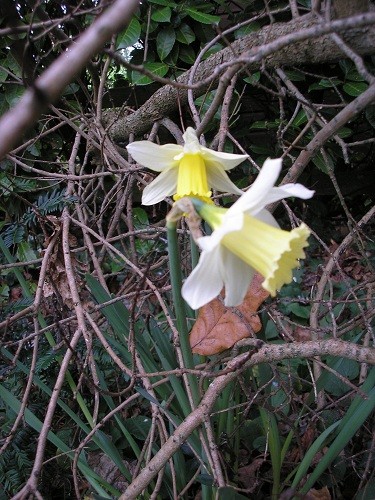 A Narcissus that is a bit too soon, have never known this one to flower so early before.

Lots of Primroses still flowering, white or the usual yellow. They started flowering very early and don’t seem the least bit bothered by the frosts that we are having. 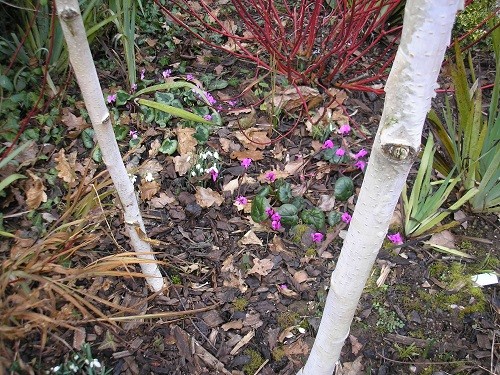 Cyclamen coum nestling beneath Betula jaquemontii and Cornus alba siberica Westonbirt. They have been flowering for such a long time, here, by the front entrance and also in the woodland at the back. 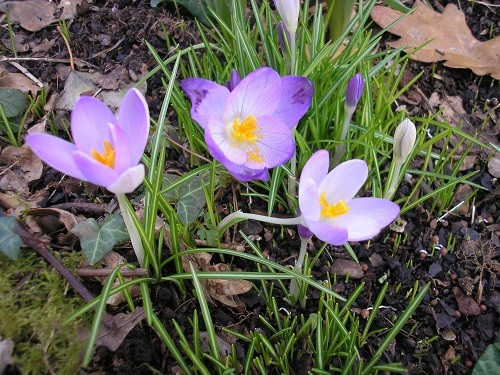 Seeding gently about in patches of sunshine in the woodland are Crocus tommasinianus. Whenever we have a mild day, these flowers are always buzzing with bumble bees which have been lured out  by the sunshine, good source of pollen and nectar. 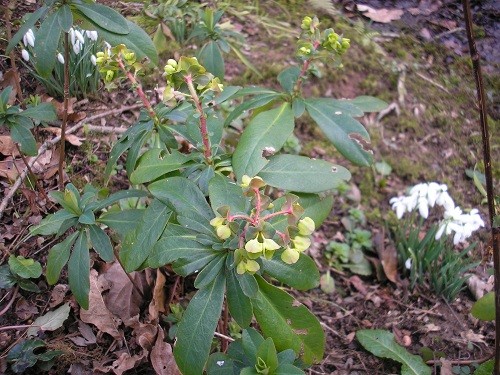 Just starting to open is Euphorbia robbiae which is starting to spread and explore round about itself, think I will have to keep an eye on this as it may spread too far, but it is excellent for covering the ground in dry shade. 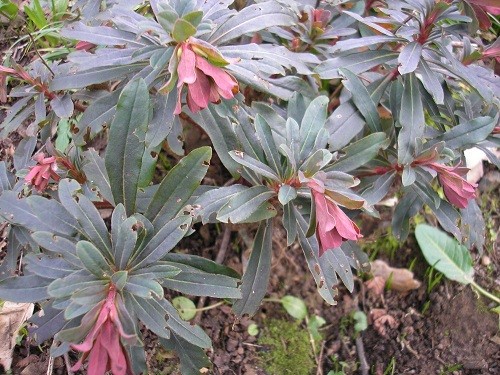 Another Euphorbia, this time Blackbird is almost in flower, nice colour coming from the bracts at the moment, but something is eating my plant, wonder what it can be that can eat it without being burnt by the white milky sap.

Still putting out a few flowers each day is Iris unguicularis, this has been flowering for such a long time now due to the mild weather we had in January, only a few flowers at a time but overall it must have produced a good number. 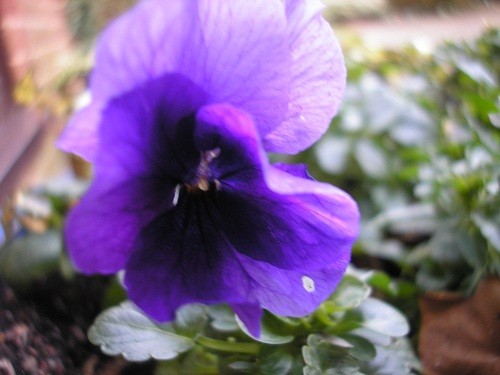 A little viola in one of the pots by the back door, determined to be noticed! 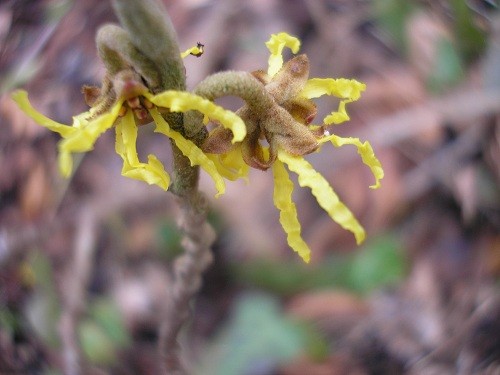 Hamamelis Arnold Promise is more than happy in the lower temperatures and has a lovely perfume, it always reminds me of Jaffa oranges and tells me it is time to make some marmalade!

That’s it for February, I hope you have enjoyed your wander through the garden, at least the half that has flowering plants in it.  I don’t think my link worked last month when I tried to link in with Garden Bloggers Bloom Day, my son will have to give me a refresher course before I try again!

18 Responses to Flowers for February.