Foliage at this time of year is putting on such a spurt of growth, some need cutting back and some need tying in, whatever it is you can’t ignore it or you would have a garden that quickly becomes out of control! Fortunately there is lots of foliage that is well behaved. I will start with Mahonia Charity which has beautiful new growth contrasting with the old.

In the foreground is Milium effusum Aureum and behind are Heuchera Marmalade and Hosta Canada Blue. When the hosta gets a bit bigger, they will make a nice combination.

Another hosta, grass and heuchera combination further along the border has Hosta June in the foreground, Heuchera behind and then Stipa arundinacea at the back. Ajuga is forming ground cover in that area, the foliage contrasting again.

Ferns are unfurling and showing their differences, so many different sorts of foliage. From the top left, clockwise they are -the Maidenhair fern= Adiantum venustum, Dryopteris sieboldii, the Holly Fern=Polystichum lonchitis, Hart’s Tongue=Asplenium scolopendrium crispum, Dryopteris lepidopoda whose fronds start out bronze colour, then change to green, and in the centre the wild Asplenium scolopendrium. Why do ferns have such awkward names, I have to look them up every time!

There’s quite a lot of different foliage in this photo. Starting at the top there is a heuchera with Stipa arundinacea, then coming forward there are some male ferns that have put themselves there, in front of them is the foliage of some narcissus and just peeking in at the bottom is a leaf of Saxifrage stolonifera. The flower is from Darmera peltata which ends up with rather large leaves.

These are the leaves of Darmera peltata which will end up quite big. This was already here when we arrived, it really is a bog plant but I can’t move it, the roots are like an elephant’s trunk and I have given up trying to dig it out. When the leaves are large in the summer, they do wilt in the sunshine and look rather a mess, I just have to look the other way!

Such a bright contrast of the Euonymus Emerald and Gold against the purple leaves of the Berberis.

The pond is fast disappearing, when the water warms up a bit I will get in there and split some plants! There is foliage of 2 sorts of iris, the Sensitive fern, Marsh marigold, Hosta , 3 sorts of grasses and a water lily.

Starting at the bottom left and going clockwise, there is pulmonarea,  Fern, the purple foliage of Lysimachia, foliage of montbretia, Solomon’s Seal, Hart’s tongue fern and epimedium. These mark the path going through the rhododendron bed opposite the back door.

Further along the path looking through the rhododendrons, towards the bog garden and circular lawn. This also has Dicentra and Meconopsis cambrica.

A yellow leaved Heuchera with Stipa arundinacea and a blue leaved hosta just getting in on the act down at the bottom right corner. These Heucheras were  planted last year and they have really taken to the position I put them in, they have grown so much already and are already making quite a statement. Did you see the owners of Plantagogo nursery being interviewed at Chelsea the other day, these heucheras came from them and I can thoroughly recommend them!

In the back garden where there are a few shrubs bordering the woodland, Philadelphus coronaria Aureus is in urgent need of cutting back, but as it is due to flower any day now, someone will have to avoid it with the lawn mower for the next few weeks!

Fuchsia Genii sets the theme for this border by the patio, this is the Sunrise border as it gets the sun from first thing in the morning, actually it gets sun all day, but I find it easier to plant a border when it has a theme. The Sunset border is opposite, across the lawn. Libertia peregrinans has leaves the same colour as the fuchsia but with a spiky shape, the same colour is echoed in the leaves of the left hand Heuchera. There are also some pale blue grasses and the purple and red heucheras.

The left hand end of the bog garden is really full of lush leaves at the moment. The fern, Matteucia struthiopteris, is spreading too much, so some of them will go into the ditch in the woodland where they can romp away to their hearts content! Hostas , astilbe, variegated iris and primulas are the ferns companions.

The right hand end of the bog has more Matteucia struthiopteris with Hosta Crossa Regal for company as well as primulas and aquilegia. This hosta is so huge now, at one time the path through the rhododendron bed came to the right of the hosta, but rather than dig up the hosta when we couldn’t get through, I moved the path instead!

What a beautiful leaf the Rodgersia has, pure metallic bronze, unfortunately as it gets larger it changes to green, but I really like it as it is at the moment, contrasting with astilbe foliage.

A fern with a metallic sheen to it’s fronds, I think this is Polystichum setiferum plumosum Bevis.

Another lovely fern, one of the many Athyrium niponicum that are on offer these days, with a golden Carex.

Climbing up the side of the house in a sunny position is Actinidia Kolomikta, a cousin of the Kiwi fruit! The leaves start out all green, then white and pink colours start appearing, then the white turns to pink and this is how it stays until they fall in the autumn.

Getting rather large now is Hosta Sum and Substance, growing on the side of the ditch by the woodland. The leaves are now the size of dinner plates and I’m having to move plants that are in danger of being swallowed up!

This is the foliage of Saxifrage stolonifera which just about appeared in another photo. Lovely foliage and it sends out runners which root so makes good ground cover. The flower spikes will soon be flowering with very dainty white flowers which seem to hover in mid air. 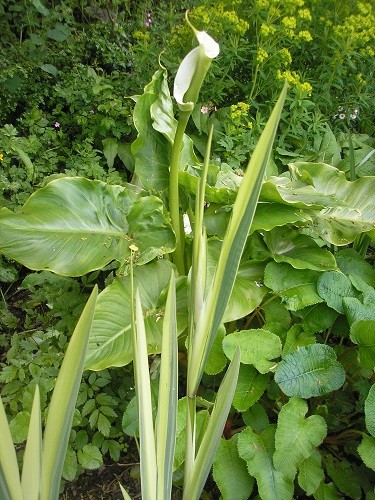 In the foreground is the foliage of Iris pseudacorus variegata with the large leaves of Zantedeschia aethiopica behind. The flower is taking its time to unfurl, I thought it would be fully open by now. There is foliage of astilbe to the left and candelabra primulas to the right.

I will finish with my box balls in the front garden which have just had their spring haircut, they were looking so shaggy, even though it is a bit early to do them. Soon they will be almost invisible once the roses get going, this is our bit of formality  for the winter, so we have something interesting to look at when washing the dishes.

I feel foliage is so important in a garden, after all we have it for far longer than we have flowers. Groupings can be made that are interesting for over half the year, “flowers are a bonus” according to Beth Chatto!

Many thanks to Christina at My Hesperides Garden for hosting Garden Bloggers Foliage once more, do pay her a visit where you can see beautiful foliage from around the world.

32 Responses to Foliage for May GBFD.