Barking up the right tree!

The cards have all been written, the parcels wrapped and all now safely posted, so now, in between cooking for the freezer, my mind can come back to things ‘horticultural’. Following on from visiting two wonderful gardens has made me look at the many different colours and textures of bark that we have in the garden here. I will save the obvious till last and start with the common myrtle, Myrtus communis which has flaking cinnamon coloured bark on top of white. 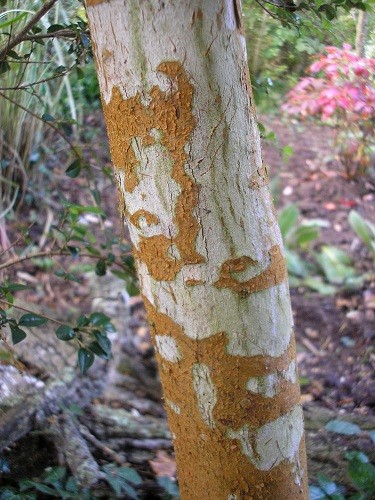 Hypericum prolificum is another with peeling bark, at times it could almost be Acer griseum, the bark peels so much. 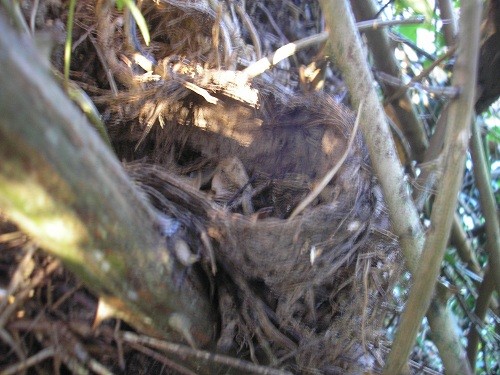 Just beside the Myrtle tree, but wedged against the dead oak, I discovered this nest which I think belonged to a blackbird, only about 3 ft away from the swinging seat where a wren had built its nest this year, hope they all got on as neighbours! 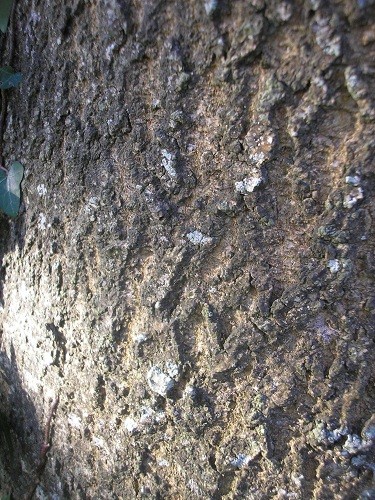 I find the texture on old trees fascinating, this is one of our ash trees, wonderful wood for carving! Hopefully it will be a long time before it has to come down and be chopped up. It is also the best for burning, giving out more heat than other wood. 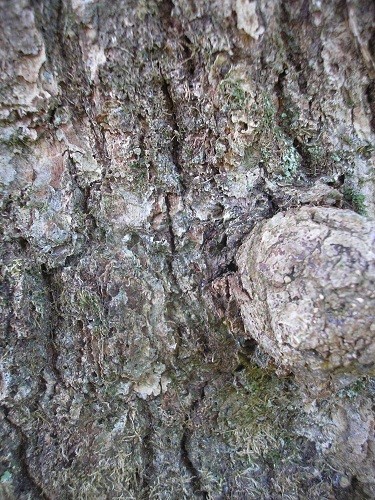 All our oaks have quite a few burrs on them. I’ve been told that these grow where they have been damaged. The old dead oak has some huge burrs which a tree surgeon told me are worth a lot of money because of the swirling grain that they contain and which wood turners and cabinet makers like to use, for now they can stay safely where they are. 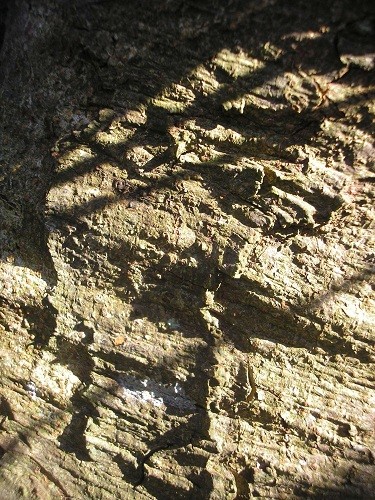 One of our old chestnut trees in the woodland has horizontal stripes in the bark, unfortunately not a good wood for carving or for burning for that matter. We have plenty of chestnut to burn on the wood burning stove but it always has to be mixed with other woods because it doesn’t give out any heat. Two of our trees have fallen over since we moved here, hopefully the others will last a bit longer. 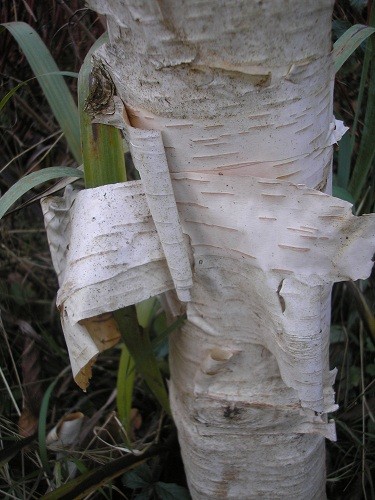 The peeling bark of a silver birch, was used for writing messages in Roman times. Strips have been found at archaeological digs in Northumberland with quite  long letters written or even lists for more provisions to be sent to the soldiers at the garrisons on Hadrian’s Wall. This one is Betula jaquemontii and has the most wonderful pristine white bark, and yes, Alberto, I do wash it when it goes green with algae!!! 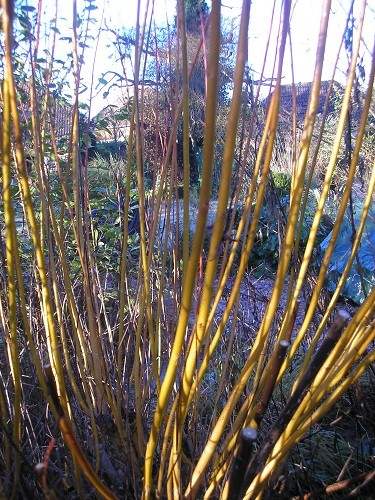 The willow that we have by the pond,  Salix alba Britzensis, gets pollarded every year so that it forms lovely golden  stems. It is on the far side of the pond but we can still see and enjoy it from the house. 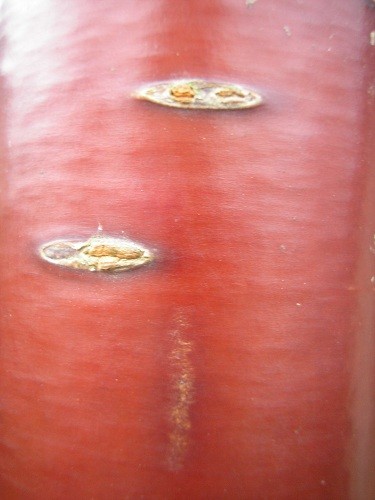 Prunus serrula, the Tibetan cherry,  don’t you just love it, I do! Some people laugh when I say that I give it a quick stroke on the way to the greenhouse, but look how it shines, it’s worth it! 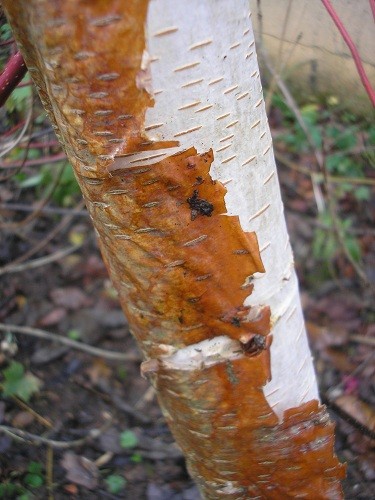 After a holiday in Canada when we stayed with a friend in the Laurentian mountains surrounded by Betula papyrifera, the paper bark birch, we just had to have one in the garden when we returned home. For a few years it has had the tan bark on the left, but this winter it decided to get rid of its tan coat and emerge pristine white, it is beautiful. 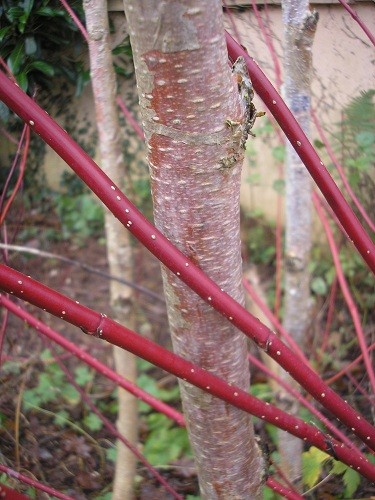 Three more young trees at the side of the drive are Betula ermanii, they are still wearing their juvenile coats of browny grey, but hopefully, by next year they will have discarded  them and replaced them with the beautiful creamy white bark that they wear in adulthood.

A silver birch seedling arrived unannounced in the garden about 10 yrs ago and was allowed to stay. It is now a fully grown tree and its bark is quite fissured and cracked which means that quite a few insects are able to live in them. This tree is just by the back door and birds are always found hopping around and exploring all the crevices for food. The silver birch is the best tree for wildlife in the UK after the English Oak. 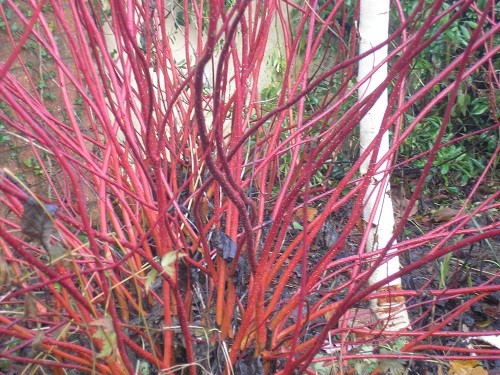 You didn’t think I could do a post about coloured bark without including my red stemmed cornus, Cornus alba sibirica Westonbirt, did you?! With coppicing the bushes we are getting more and more stems each year with bright lipstick red bark. They certainly brighten up a dull day at the side of the driveway and lift the spirits until the snowdrop season starts properly in just a few weeks time.

It was good being tempted out into the garden to take the photos for this post, I wouldn’t have found the blackbirds nest if I hadn’t. The weather today is what I would call raw, cold with wind coming from the north but rain definitely on the way. At least when the weather is bad I can enjoy the coloured bark of my shrubs and trees from the warmth of the house!

24 Responses to Barking up the right tree!