As I mentioned in my previous post, after visiting Wisley we headed south  and found a super pub near to Romsey for a bite to eat before visiting the Sir Harold Hillier Arboretum where I knew they had a 3 acre Winter Garden. Their literature says that they think it is the largest winter garden in Europe.  By the time we got there, 2pm, the frost had all gone and the sun was starting to get lower in the sky so the garden didn’t have the same sparkle that the previous one did. In spite of that, there were plenty of evergreens, textured bark and coloured stems to admire. The first hedge that we saw was of Rubus cockburnianus with its ghostly white stems. 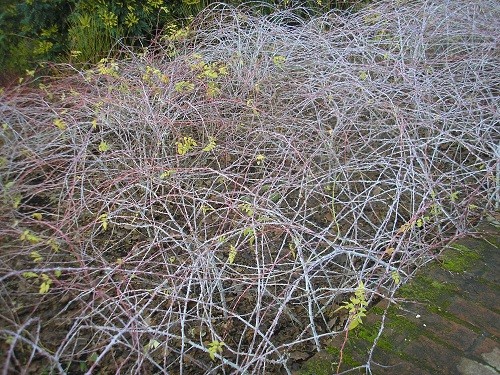 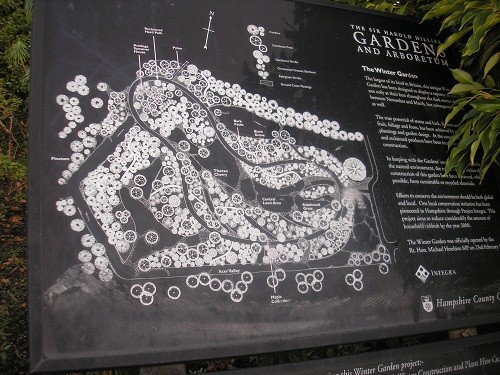 The plan of the winter garden meant that we could plan our route taking in the trees and shrubs that we most wanted to see.

Not quite as colourful at the entrance as Wisley had been but lots of different shapes and textures make it interesting. 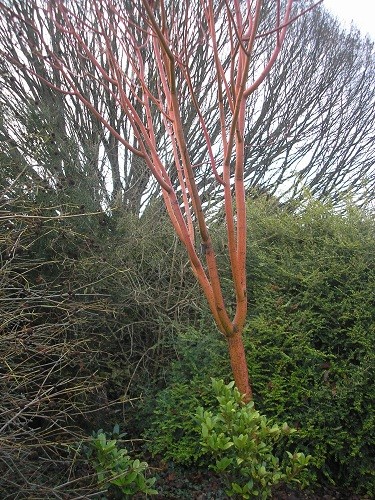 We soon found some really beautiful bark on an Acer tree, didn’t write it’s name down, but not to worry……. 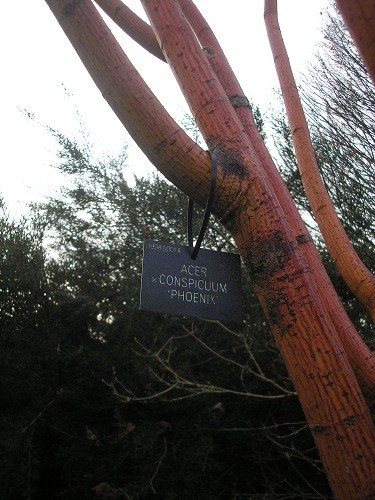 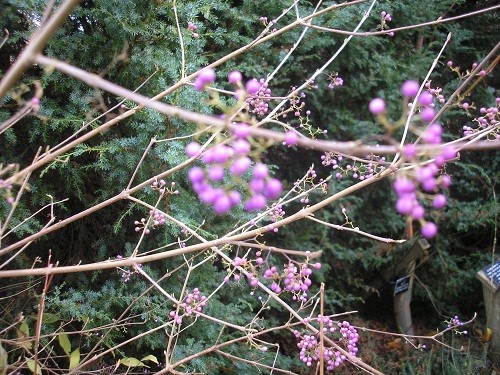 Oh dear, sorry, out of focus and I can’t go back! Fantastic berries on the Callicarpa dichiotona variegata, such a wonderful colour. 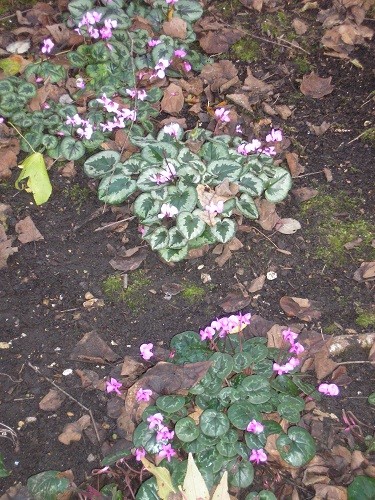 There were still lots of Cyclamen hederifolium flowering which looked so pretty under all the huge trees. 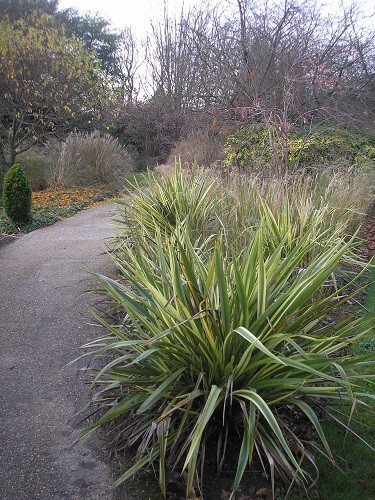 Lots of different Phormium were adding their evergreen colours to the tapestry, their spiky leaves contrasting with everything round them. 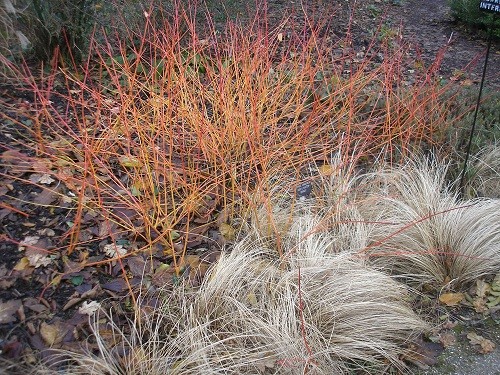 More cornus, this time C. sanguinea Amrys’  Winter Orange which contrasts with the Crown Artificial grass in front, their bleached leaves blowing in the freezing wind. 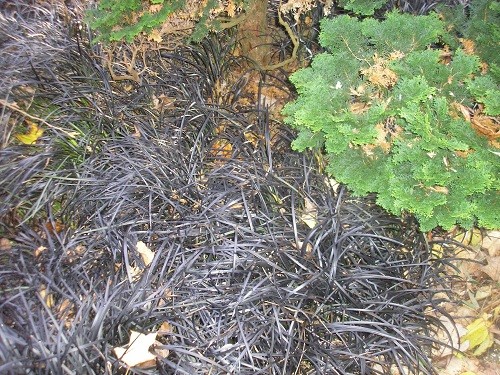 It’s nice to see someone else with a large patch of Ophiopogon planiscapus nigrescens used as ground cover like I do!! 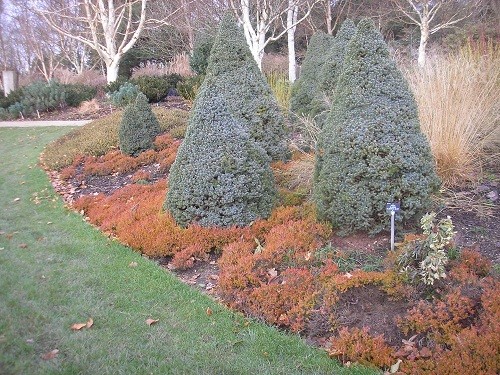 In the foreground is Erica carnea Ann Sparkes planted under the blue Picea glauca Alberta Blue. I think the Picea are this shape naturally, I couldn’t see any evidence of them being clipped to shape. But what is that in the background, my favourite birches in the birch grove. found them at last! 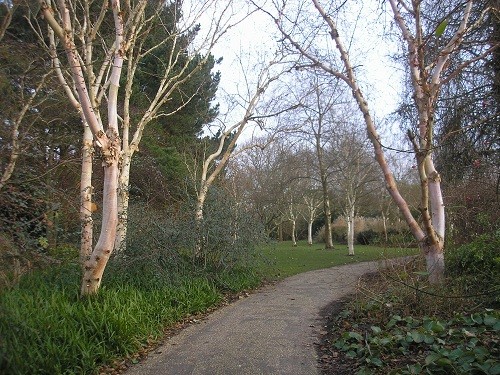 All except one of these birches are Betula utilis, can you see one just right of centre, in the middle distance which looks rather dirty ? that is Betula papyrifera, the paper bark birch. I have one at home but mine is just shedding its young ginger coloured bark and its new bark is pristine white, hope it will stay that way with a wash each year. Mine is in my new header photo above, such a clean white at the moment. 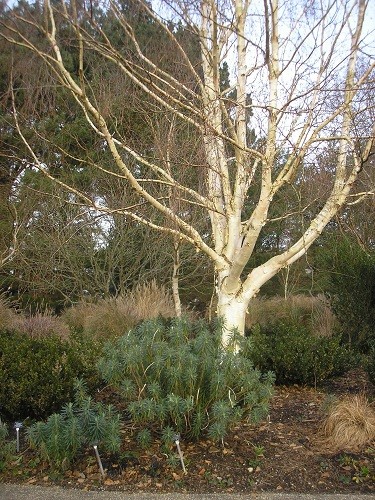 Another beautiful birch, Betula occidentalis Kye Lang showing up so well with the evergreens around it. 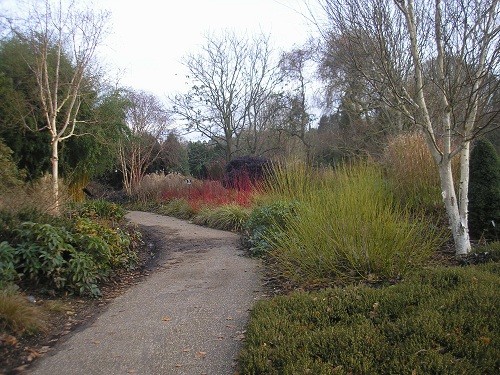 Just a general view of coloured stems, bark, evergreens and different textures, this just shows that a garden doesn’t need to be bare in the winter. Maybe just a small corner could be adapted that could be seen from the house so you don’t have to go out in the cold to see it! 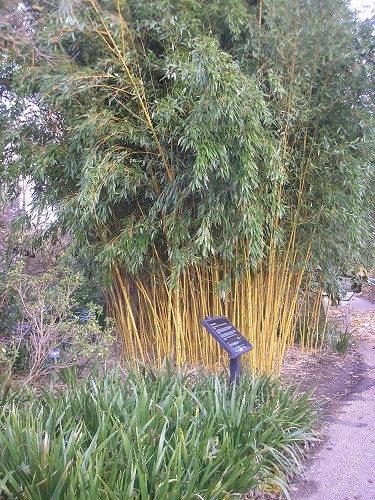 More coloured stems, this time from the golden bamboo,  Phyllostachys aureosulcata Spectabilis. It obviously spreads a lot as it was surrounded by a very heavy duty ring of rubber. 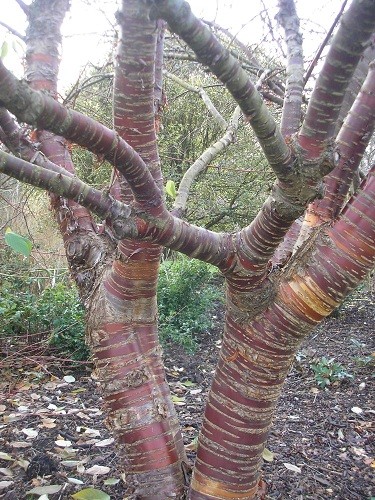 The Tibetan cherry, Prunus serrula makes a nice contrast but I felt it could do with a bit of a polish, I’m always rubbing mine at home to make the bark nice and shiny, I felt I needed a cloth so I could do theirs! 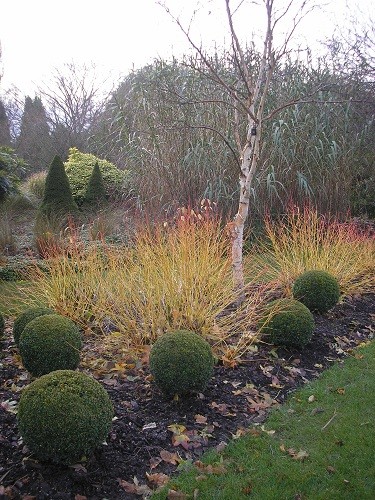 Almost time to leave now, so I’ll finish with some more shapes from box balls, coloured stems from cornus, bark from the birch tree, colour from the yellow bush in the background and all contrasting with the evergreen firs with their conical shape, what more could you ask from a winter garden – lovely!

It took us another 2 hrs to reach home, but we both really enjoyed our day and felt that it had been much nicer than hurrying straight back home from Kent.

16 Responses to Winter garden at Hilliers.