I don’t think I have ever seen the garden look so pretty.

Everywhere I looked, the frost had worked it’s magic and transformed leaves and stems into something from another world.

I know we are not supposed to walk on the grass when it is like this, but the temptation was too great – I had to photograph everything before it vanished.

The Stipa gigantea flower heads really sparkled silvery white in the sunshine and contrasted with their summer display when then they looked like spun gold.

The leaves of the Yucca, which are spiky enough by themselves, have been transformed and look as though they have a set of shark’s teeth.

The flower is still there, but I think it must be freeze dried by now.

The dried flowerheads of hydrangeas have taken on an extra beauty where each petal is almost completely covered in frost.

I’m used to cleaning the cobwebs from inside the house, but had no idea that there were hundreds hanging on the outside, thank goodness they don’t normally show!

Some flowers had already started flowering for next year and the primulas are still bravely carrying on in spite of the cold.

Going into the greenhouse reminded me of when I used to be a child, many years ago, when, with no central heating or double glazing, Jack Frost made wonderful patterns on the inside of my bedroom window. Obviously the temperature is below freezing in the greenhouse but everything is wrapped in 4 layers of fleece, so I am hoping that there won’t be any casualities.

Walking round the garden and seeing it so white was truly magical. However I am getting worried about the molehills – they are advancing towards the house – I think it is trying to get in to get warm!

Down here in Devon we do not normally get weather like this and we have not had freezing fog in the 20 years that we have been here. 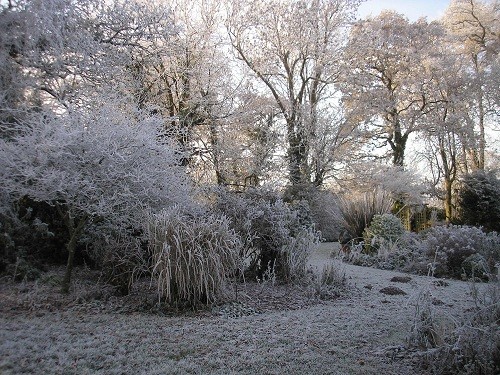 It’s just as well that I got out and photographed everything in our winter wonderland – by the next day it had all gone – or maybe I dreamed it all !!

This entry was posted in News and tagged fog, Frost. Bookmark the permalink.