At last we have enough snowdrops flowering to be able to talk about them. The three special early ones by the front door that should have been out before Christmas, flowered just after New Year but didn’t enjoy the frosts that we have been having. These are a lot bigger than the wild snowdrop and in the frost the stems collapse onto the soil ( just like a hellebore ) until the weather warms up a bit, when they will stand tall once more. In the bad weather the best place to enjoy snowdrops is inside the house! 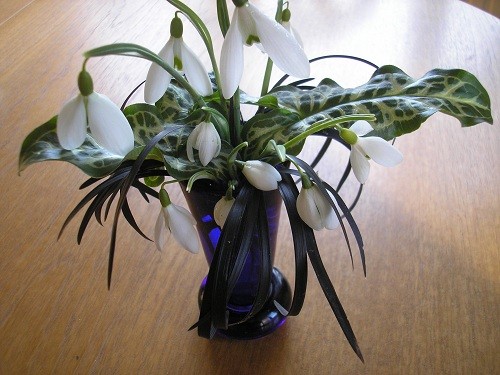 Did you know that snowdrops have a beautiful delicate perfume – I didn’t until I brought these inside. Should have waited to photograph them though, a couple of hours later they had opened right up and you could see all the different markings on the inner petals.

Also in the little vase with the snowdrops are leaves of Arum italicum Marmorartum, they are just the right size at this time of year. Later,  the leaves get quite a bit larger, about the same time as the flower spike appears in the summer.

The black spikes with them are the leaves of  Ophiopogon planiscapus Nigrescens. I have spread this around the garden, starting with just one plant, for contrast with other foliage. The best clump that I have of it is in the gravel at the back where it has spread nicely – it seems to be happiest here on heavy clay , in part shade. This clump now measures about 4 ft by 2 ft and is still expanding, I think it looks like a sheepskin rug !

Now for those lovely snowdrops. This one is Galanthus ” John Gray ” and is quite a large one.

This is Galanthus ” Ophelia “, which is a lovely double.

Galanthus “Atkinsii ” is quite an early one to flower and is tall.

Galanthus “Magnet” multiplies up quite quickly, good for selling on charity open days. The flower dangles on a longer than usual pedicel and therefore looks as though it is dancing in the breeze.

Galanthus elwesii “Mrs. McNamara ” is another tall early one, see how much larger it is than the little wild ones beside it.

More special snowdrops will open over the next few weeks – we need a bit more sun so that the flowers open wider and we can see how different they all are from each other – gardeners are never satisfied!!

This entry was posted in News and tagged Arum, Ophiopogon, snowdrops. Bookmark the permalink.