This is a project that has been in the making for such a long time, simply because I kept putting it off, so I decided to bite the bullet and get on with it this year, now that I am having to spend so much time at home. The rockery bed is at the side and back of the house and is a roughly north facing slope with the high side facing south and east.There were small trees and shrubs that I had planted over the years but they had all grown far bigger than I had thought they would and were causing a lot of shade ( which I already had plenty of in other areas!) so it was time for a clear out. 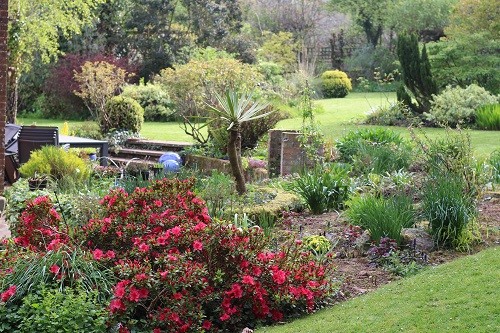 This shows the rockery from the back lawn, you can see all the empty spaces waiting to be filled. The border wraps round the alpine scree which is where the variegated yucca is and the back of the Bar-b-que which doesn’t get much use any more., maybe I could use it to display some pots? 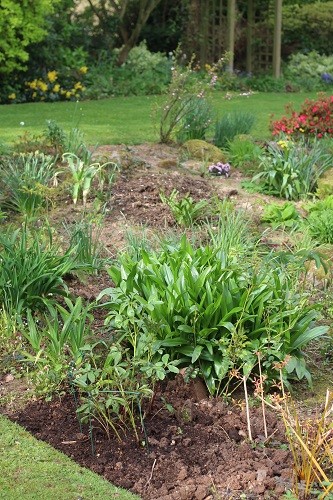 Looking the other way towards the back lawn and woodland. 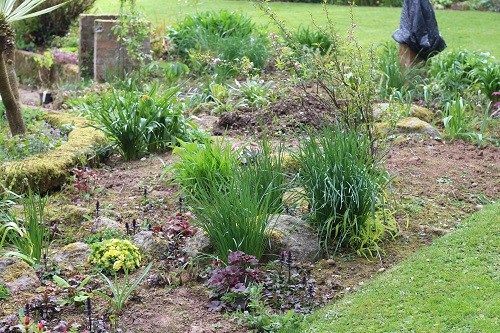 Lots of space for lovely new plants, none of which are supposed to grow more than 3 or 4 ft! 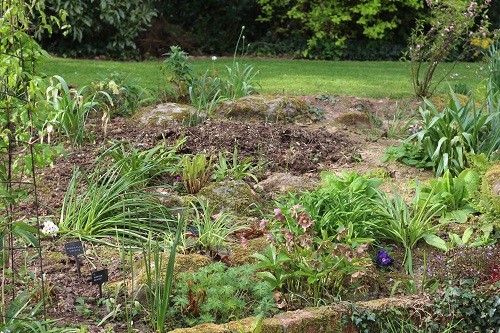 There will also be lots of room for bulbs to be added next autumn.

There is also lots of room to move plants from other areas in the garden.

This is one load of plants waiting patiently for me to get a move on. Having this lockdown is giving me plenty of time to email nurseries and order so many plants, it is a bit too easy and far too tempting! This order came from Crocus who were very happy to sell plants that should have gone to Chelsea and Hampton Court Flower Shows. 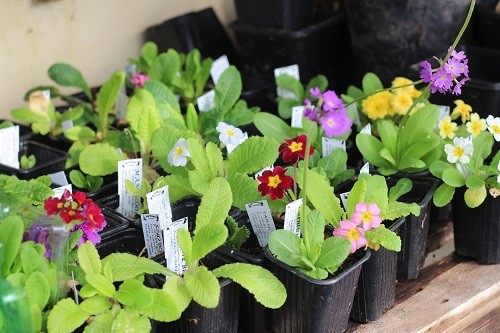 Various primulas which I ordered last year from Barnhaven Primulas in France before we left the EU. as I wasn’t sure whether we would be able to order from them in the future. They came as tiny bareroot plants, not all for the rockery, some for the bog garden and some for the woodland. They seem ready to plant out now. 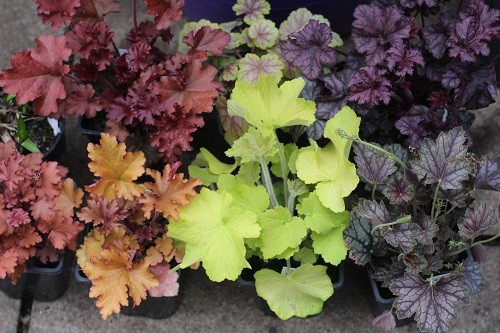 Another order arrived recently from Plantagogo. I have ordered my heucheras from them previously and always been pleased with their plants. They always win gold at Chelsea and the other flower shows and I think they were pleased to sell a lot of what would have gone there this year but of course, all the flower shows have had to be cancelled. Some will like the sun and some the shade which will be caused by the larger plants.

You will see from the plants that I’m not going for tiny little rockery plants, I have strong beefy soil which will have compost and grit added to it, but basically it is very heavy clay so needs plants that can cope with it.

I tried planting a short while ago, but it was like digging in concrete, such a change from a month ago when everywhere was sodden! Also when I was vigorously digging with my trowel, I struck a stone and such an excrutiating pain shot up my arm, I really thought I had done some serious damage, but no, a good rest for a couple of days  and I was back out in the garden, working. At the moment, at the end of April, we are now having rain every day for a week, the April showers have arrived that we should have been having on and off all month. The soil is now much softer, so much easier to plant in, so once more, no excuse for not rolling my sleeves up and getting on with it, I’ll just have to dodge the showers to do it!

Is your garden benefiting from our enforced lockdown? I think everyone is going to have a wonderful garden this year!

This entry was posted in News and tagged heucheras, planting a rockery, primulas, Rockery plants. Bookmark the permalink.