Makeover for the gravel garden.

The gravel area, tucked away at the back of the house, next to the hedge between us and next door, was looking the worse for wear and was in desperate need of a makeover. Up until now, it has mainly been planted with foliage plants with various textures, shapes and colours. The weeds this year were everywhere and had rather taken over. I should have taken photos before I started weeding, but forgot, or maybe I was too ashamed to show how awful it was!

Quite a large space has been left after removing all the seedlings.

Shrubs had seeded into the gravel and grown to quite a size, I removed 3 Euphorbia melliferra, 1 Hypericum,1 Potentilla and 4 Silver Birch. Also a small yellow rose was potted up, this was all from the one small area above!  Masses of Euphorbia cyparisus was pulled out, it was sending runners everywhere.

More cutting back needed I think.

In this corner, plants had just spread far too far, so have been given a severe haircut.

I started cleaning up my lovely huge pot, but got so tired, I will have to finish it some other time, at least I can see how much I have done!

Oh dear, it just gets worse!

Wooden planters that I bought a long time ago have rotted away and need replacing, replacements have been ordered, fibreglass this time so hopefully they won’t rot!

I realise from this photo that the plants by the hedge have grown so far forward, they really do need pruning hard back to let more light get through to where I will put the replacement container.

The same again in this corner, lots more pruning and loads of wild crocosmia to remove, we have to be able to get through to clean the windows!

The soil in this area is the same heavy red Devonshire clay that is in the rest of the garden. I have always had problems growing silver leaved plants which like good drainage, they all succumb over our wet winters, no matter how much grit gets put into their planting hole. I thought that by having lots of pots of varying shapes and sizes, I could plant silver leaved plants and bulbs that like good drainage, in them and have them in the area where all the seeded shrubs had been.

I always used to love sitting here in the dappled shade for my morning coffee, not lately though, it was such a mess!

The bench and little table which have been under the arbour for years are also in need of a makeover. I have bought a tin of pale blue preservative, colour Cool Breeze, and will co-ordinate them with some pots that I want to paint too.

Changing the colour of the bench and a few pots to pale blue, was inspired by buying a new grass, Festuca glauca Incredibly Blue.

Inspired by a grass, isn’t it a beautiful colour.

This is also similar to the colour of the Echeveria which live outside in this area for the summer and overwinter in the conservatory. 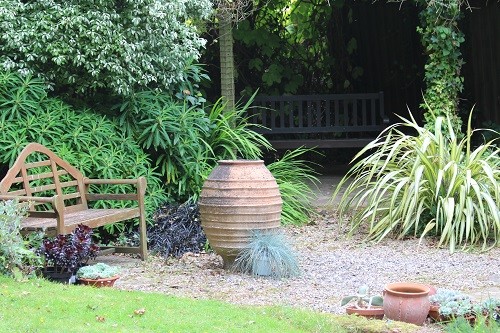 I’ve been changing the seats around.

The Lutyens type bench has been brought out into the sunshine, this will be painted pale blue, after it has been scrubbed, sanded and primed,  and under the arbour, I have brought the bench that was by the back door. This will also be painted pale blue so that it shows up better. All will be explained in a future post!

I’m not sure how long this is all going to take me, but by telling you all about my plans, will certainly  make me get on with it!

30 Responses to Makeover for the gravel garden.