To a lot of people snowdrops are all the same, I thought this for many, many years, until I once visited a garden which had lots of really different varieties and fell under their spell. There are still species snowdrops to be bought, but mainly these days the bulbs that are bought are the many hybrids that are produced, sometimes by seeding naturally, sometimes by selective breeding. Some bulbs cost a small fortune, upwards of £300, but a lot can be bought quite reasonably, thank goodness. I only ever buy one of each variety, then wait for them to bulk up, some do so much quicker than others. Snowdrops vary in the length of the flower stem, in the colour of the leaves, how the leaves are joined to the stem, are the leaves pleated or not, are they twisted, and how fat or thin are the leaves. The flowers can be single or double, and the marks on the inner petals vary considerably. Some hybrids have markings on the outer petals and some have yellow markings where all the others are green. In spite of all this, the wild snowdrop, Galanthus nivalis, looks wonderful when spreading in drifts in a woodland setting. This year, because of the mild winter that most of us have been experiencing, the hybrid snowdrops are 2 to 3 weeks ahead of where they would normally be, but the wild ones seem to be about the same as usual, they are here anyway.This post will be about the hybrids that are out at the moment, I will do a post later about the wild ones and the later hybrids. I will start with Atkinsii which was flowering just after Christmas and is now just starting to go over. This one bulks up quite quickly and is good for selling at open days when raising funds for charity, quite a tall variety. 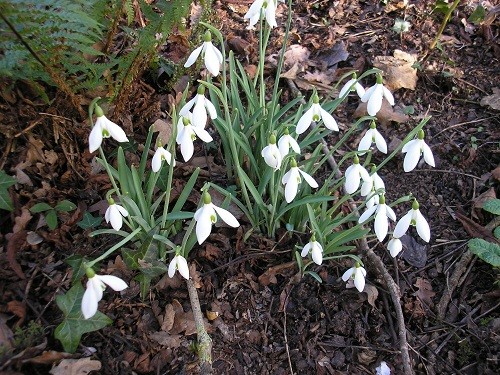 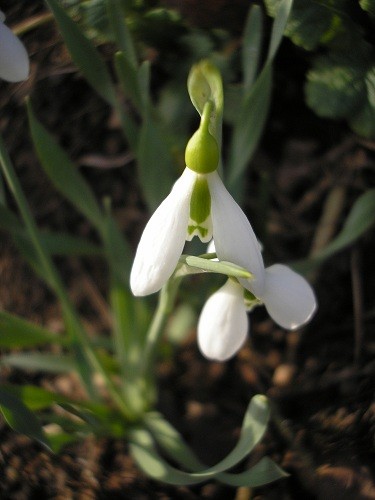 The twisted grey leaves indicate that this is the species gracilis, a lovely small snowdrop with beautiful clear markings on the inner petals. 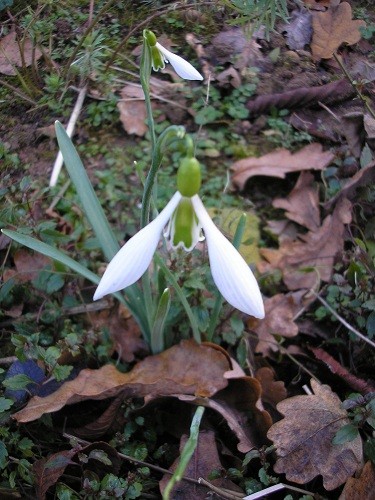 Lovely green marking, all down the inner petals. This is just 2 yrs old and has now put up 2 flower buds, hope it continues to increase like this. The name Ding Dong is explained by the fact that it comes from Avon Bulbs in Somerset ( I get most of my snowdrop bulbs from them), think back to the Avon cosmetics TV advert in the 70’s, you would have to be a certain age to understand!! 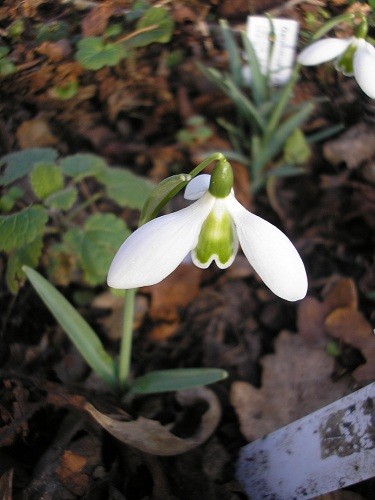 This one is called Lapwing and I think has a rather nice marking on the inner petals.

Still havn’t identified this one, can anyone help please, quite tall with very grey leaves. 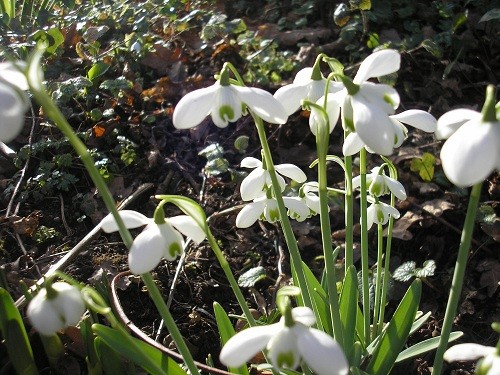 A large double, Desdemona, increases nicely, looks lovely when fully open in the sunshine. I don’t have many doubles as I feel they look rather similar. 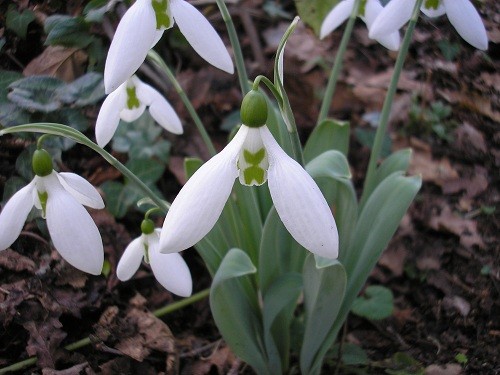 A very tall snowdrop with large flowers and a fantastic marking on the inner petals. John Gray was the first special one that I bought, it has a lot to answer for!

A tiny snowdrop, a species Galanthus rizehensis, lovely little one which increases well when happy, I think mine are happy! 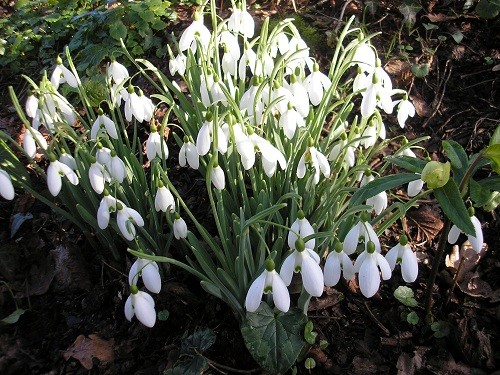 Another that is very happy and gets split for open days is Magnet. This has increased really well and is now forming nice large clumps. I split mine when flowering is over and the leaves are just starting to turn yellow, I feel that the leaves have now fed the bulbs for next year and it doesn’t seem to do the bulbs any harm as they always flower again the following year without any problem. There is a feeling now that we should leave them to be dormant before splitting them, this would mean digging them up in the summer when I would never be able to find them, think I will stay with the old method as that is what works for me! 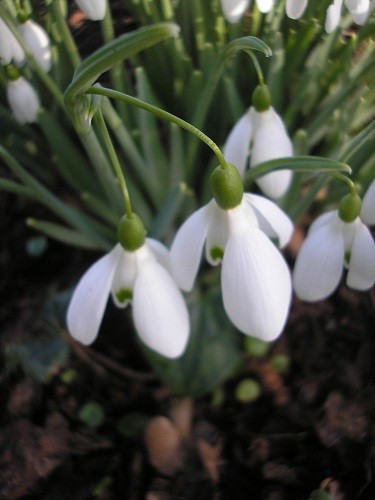 This is still Magnet, showing the extra long pedicel which joins the flower to the flower stalk. Because the pedicel is so long, the slightest breeze makes the flowers dance as if they are a cloud of butterflies!

Very new, just planted last year, Modern Art. The leaves are grey with a silver stripe down the centre. 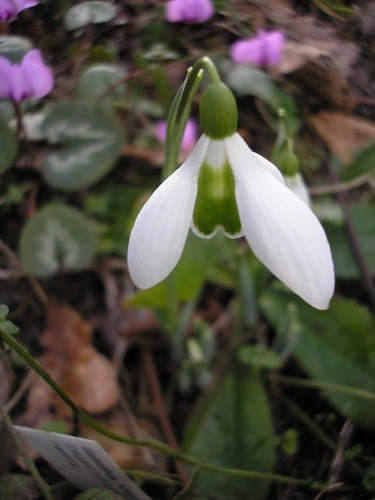 Alison Hilary, another nice one, just starting to increase well. 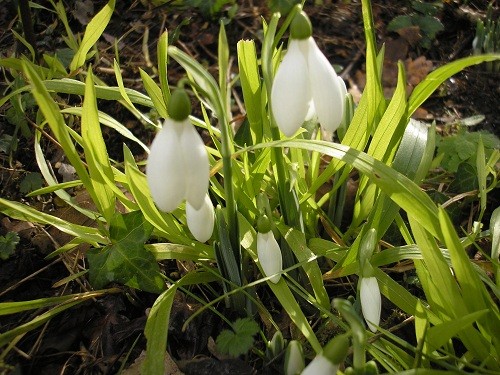 Straffan is being over run by Milleum effusum aureum, must do a bit of judicious weeding before the snowdrop gets choked to death! 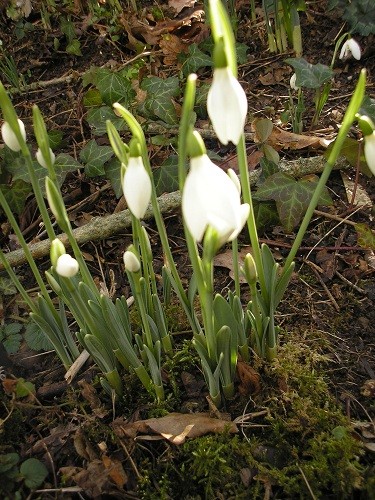 Robin Hood is another tall snowdrop and another of my first ones. I wish this had opened up so that I could show you the markings inside, maybe next time. 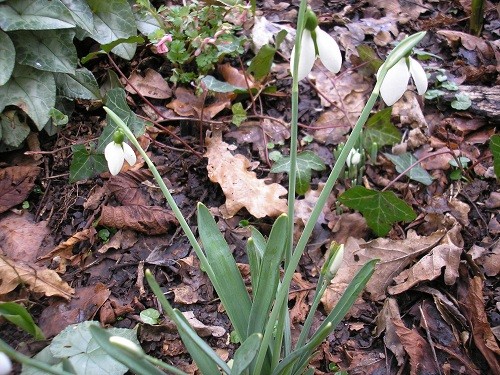 Another of my early purchases, Merlin, the first one I bought with all green inner petals. This is quite a tall snowdrop, but hasn’t increased as fast as some of the others unfortunately. In the background you can just see some of the wild snowdrops just starting to show, they are coming on time, have never known the others to be so early.

Showing the really dark green of the inner petals on Merlin.

This one is Augustus and has quite rounded flowers compared to some of the others and the leaves have a silver stripe down the centre. The outer petals have the texture of seer sucker material. 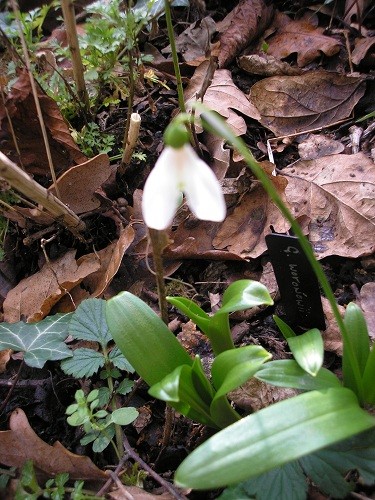 Another species, Galanthus woronowii, which has very dark green shiny leaves. I have found that this one is seeding around and has now formed 3 distinct clumps – lovely! 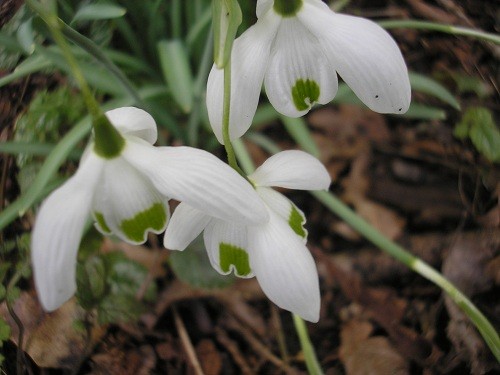 Another double, but not as tall as Desdemona is Hippolyta. The petals are quite heavily ridged on this bulb that is increasing nicely.

These are all the snowdrops that are flowering at the moment. There are lots more still to come and of course the wild ones which will make the woodland look as if we have had a sprinkling of snow, should open in another couple of weeks, will keep you up to date. Do you still think that they are all the same, I hope not!!

This entry was posted in News and tagged Galanthus, nivalis, snowdrops. Bookmark the permalink.