I feel that it is now time to start dividing my single wild snowdrops. Due to our record breaking warm temperatures in February, the wild snowdrops were unfortunately over very quickly. I have noticed a few rather large clumps which need splitting to fill the spaces where there aren’t any, this is the only way I’m going to get the nice drifts that I love so much.

Definitely in need of splitting.

This was just part of a clump, they were falling apart while I was digging them up.

So far I have dug up 3 clumps and divided them into 67 smaller clumps. They might look a bit pathetic next year, but hopefully. after that, they will start to increase again.

These are now in the woodland along with the rest of this clump.

To start with I got a large garden fork and dig the clump up, then split them into smaller clumps by just pulling them apart, trying to be gentle at the same time, so that I don’t damage the roots, this clump though did it all by itself.

Spread nicely over an area which was smothered in ivy a few weeks ago. I have now planted foxglove seedlings in amongst them.

The new little clumps get planted with my nicely rotted leaf mould, not forgetting to water them in,  a mulch is given of the same leaf mould, then it’s up to them to decide that they like their new home and settle in. Since I have planted them we have had quite a bit of rain each day, so no more watering has been needed.It is back breaking work, but will be well worth it when they all start to increase once more and delight me on a cold, dull February day in years to come. 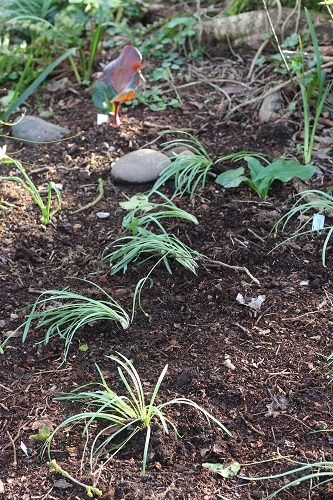 More planted by one of the huge chestnut trees.

I’m hoping now that I have just one more clump to do. I have also planted all the primrose and foxglove seedlings that I dug up about a month ago, they had all rooted nicely in their little pots. Neil has moved 3 large hellebore plants from the bog garden and they look very happy, I’m hoping that they don’t realise that they’ve been moved as I asked him to dig them up with as large a root ball as possible. I have also planted 2 more acers which have been in pots for a few years, I’m sure they appreciate being released into the woodland. 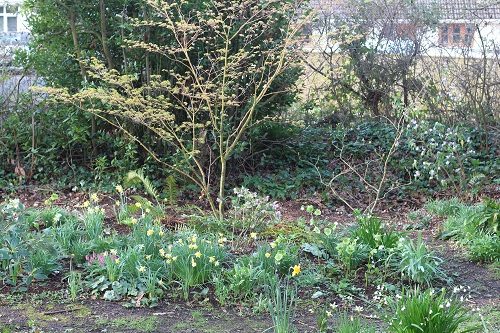 The view now from the archway into the woodland. Acer Sango kaku is at the back with Daphne bholua at the right hand side.

All the plants that I ordered for the woodland have been planted in the new area that has been cleared by taking the rhododendrons and ivy out and what a difference it has made. Getting rid of the rhodos has made the woodland so much lighter, I’m sure all the other plants will benefit from the extra light. I now just have my special snowdrops to bring over from the veggie area where they have been patiently waiting to add interest to the new path that has been made by Neil, then I can have a rest and get on with the rest of the garden! 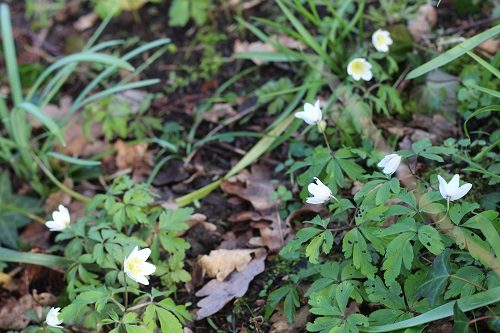 Wood anemones have been spreading nicely.

Fritillaria meleagris are strting to flower, the rusty pheasant is on guard duty!

Round the back on the new path where lots of plants have been moved from the rest of the garden. 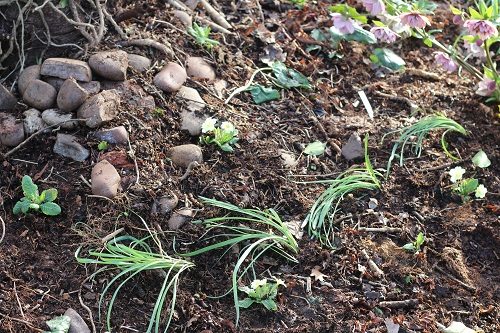 Primroses and snowdrops that I planted in the roots of the Chestnut tree, but look at all the stones I had to remove first! 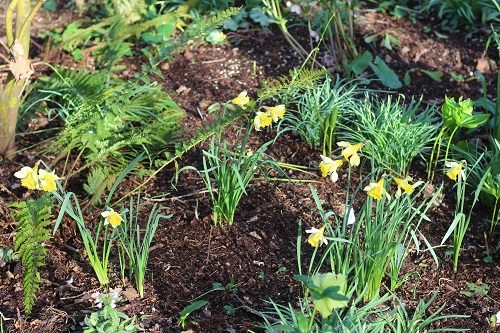 These Narcissus pseudonarcissus were hiding under the rhodos, at last I can see them, they have seeded themselves here at the back of the border without any help from me.

There isn’t much more to do to the new area now, move my special snowdrops that have been patiently waiting, then maybe a few more plants to be moved from elsewhere, but then that should be it until the autumn when I can go mad with lots more bulbs! My concience is now clear, I have done, with a lot of help,the path that I said I was going to do last year, it’s only 13 months late, but I got there eventually!

This entry was posted in News and tagged splitting snowdrops. Bookmark the permalink.