Our cold spell put the brakes on our early bulbs, one minute they were flowering merrily with lots of buds to come, but they seem to have been put into the pending file until the weather warms up again. Narcissus are definitely behind last year, with only a few flowering so far. As usual, I will take you for a walk round the garden, starting with the chaenomeles outside the back door.

March frost. snow and ice finished off all the flowers that were out at the time, but now more buds have opened and the bush is looking good again.

Round into the front garden, the Camellia by the drive almost has its flowers open, just a couple more days then the bush will be covered.

Hellebores still standing up beautifully, these were really squashed by the snow.

Primroses everywhere in this border, making me feel that spring has arrived.

There are so many seedlings, I must move some to the back by the ditch in the woodland. The cornus stems were cut down last week ready for new stems to form for the summer.

I like this narcissus with its long slim trumpet.

Moving over to the border by the field at the side, the winter flowering heather is still looking good.

Under the pergola, near the veggie beds,this early primrose needs splitting, so I’ll move some to the semi shade of the rockery so that I don’t have to walk so far to see it!

Ypsilandra always surprises me when it flowers. I planted this in the bog garden, many years ago, but i think it maybe too wet for it. I think a move to the woodland would be better.

Hellebores and narcissus looking happy in the rhododendron bed.

These narcissus are Tete a Tete, lovely small narcissus that can take anything the weather throws at them.

Spring flowers in the Meconopsis bed.

Cyclamen coum flowering still on the rockery at the back.

Still on the rockery, Primula denticulata.

Pulmonaria are everywhere and starting to flower, much to the delight of any passing bee.

Snowdrops are still in the background, they aren’t finished yet.

In the woodland, the snowdrops are G. Wareham and the narcissus is the species pseudonarcissus.

Corydalis  solida Beth Evans always looks so pretty so early in the year.

Scilla sibirica is such a stunningl shade of blue, and is so tiny, but it still packs a punch. This is the only one flowering this year so far, last year there was a small river of them through the border in March.

My first fritillary flower, soon there will be lots more!

Crocus will open up in the afternoon sun if it decides to come out.

In the back garden again, Anemone Sylphide, I was hoping this would have increased, but still just the one flower unfortunately.

Lovely multiheaded , tiny flowered narcissus, on the rockery, this one is being contrary, it is earlier than usual. 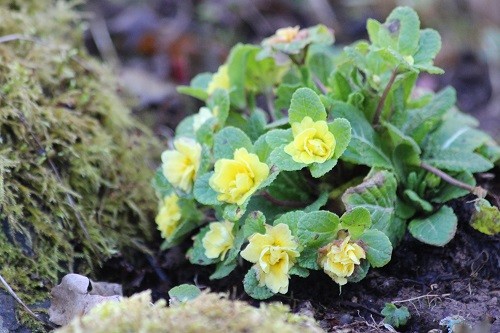 Still on the rockery, my new double Jack in the Green primrose, given to me by a friend,  has started flowering again after all the ice and snow.

Pink Chionodoxa on the alpine scree, are increasing nicely.

I rescued this primula last year fom a sale table, it cost me 50p.

My Camellia in the corner of the back garden is still looking wonderful, despite the snow, ice and frost. It has been flowering since November and I think it is wonderful!

A very pretty hellebore just before I get round to the back door once more at the end of our wander.

Looking back at last year’s Bloom Day for March, it is soon apparent that this year we are way behind now, thanks I would think to our spell of snow, frost and ice. Hopefully the plants will soon catch up and get back to normal.  Have your plants been affected by the weather this year?

Thanks go to Carol at May Dreams Gardens for hosting this monthly meme showing flowers from around the world. Do pop over to her, you never know what you might see!

This entry was posted in News and tagged March flowers. Bookmark the permalink.