As there is so much flowering away at the moment in my garden I have decided to join in with  Chloris at The Blooming Garden and her “10 Flowers on Saturday” meme, held on the 23rd of each month

At no 1 is the Prunus family and I’ll start with Prunus Kojo-no-mai as it is looking so lovely at the moment.

Prunus Kojo-no-mai is looking beautiful at the moment. I don’t think it has ever had so many flowers before, possibly due to the hot weather last summer ripening the wood maybe.

This is the first time it has been such a mass of blossom. 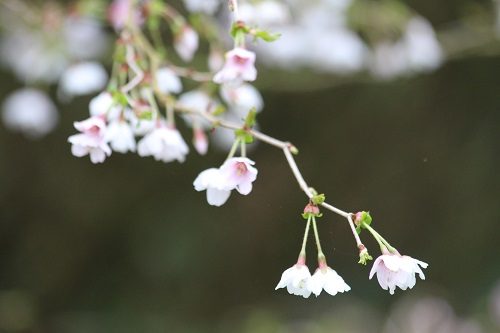 Such lovely dainty flowers. I had discused with Neil whether we should trim some of the branches and thin its crown…..I think it heard us and decided it wants to be left alone!

Also in the prunus family is the common Blackthorn, Prunus spinosa. 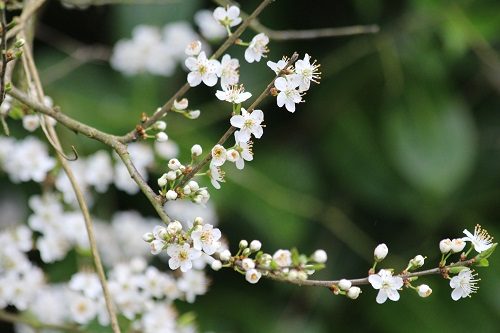 I wonder how many sloes will form for someone’s gin?

The cherry by the gateway is just starting to flower with its beautiful blossoms.

Soon the tree will be covered in blossom.

No 2 is the Primula family which seem to like my soil, so I’ve planted plenty of them! 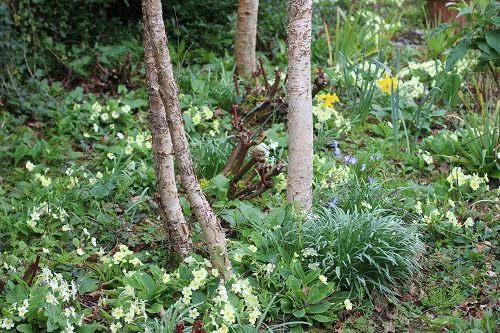 I’m trying to encourage drifts of plants into the garden, rather than lots of different ones. It is slowly working, allowing plants to set seed and moving seedlings where necessary. Seedlings of these primroses have been moved to the woodland. Gardening certainly teaches me patience!

A double blue, soon to be moved to the rockery where I’ll be able to see it better. 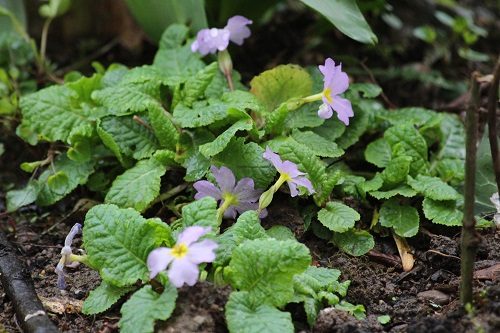 Primula sibthorpii which is always my first primula to flower. 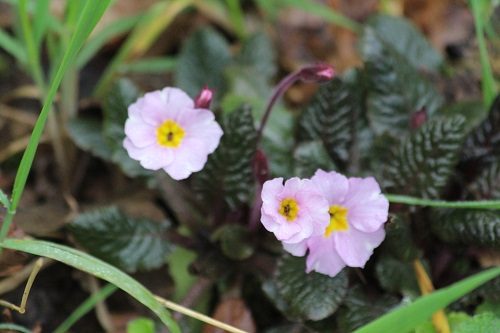 Primula Guinivere, I love this one with its dark coloured leaves. 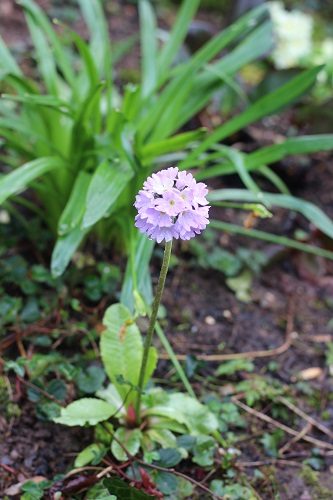 The first of my drumstick primulas to flower, more to come I hope. 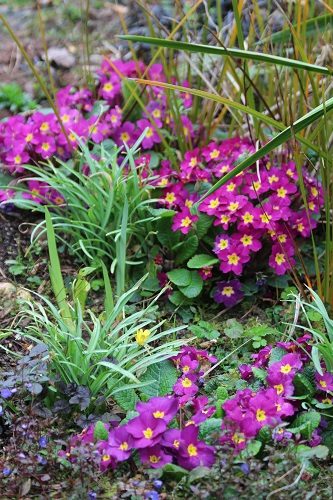 A cheerful purple primula on the rockery, obviously happy as it is spreading so much. 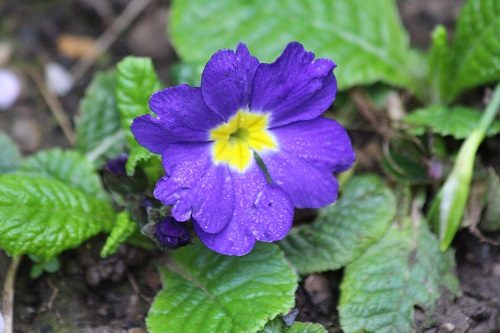 And a blue one to keep it company. 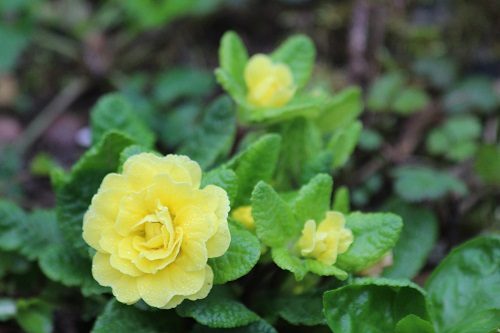 A lovely Jack in the Green type of primrose which has some of the petals green like the leaves.

No 3 are my Fritillaries which just keep on getting better and better each year.

Both anemone nemerosa and fritillaria meleagris are spreading nicely. 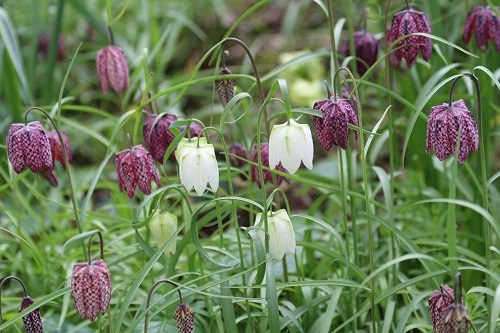 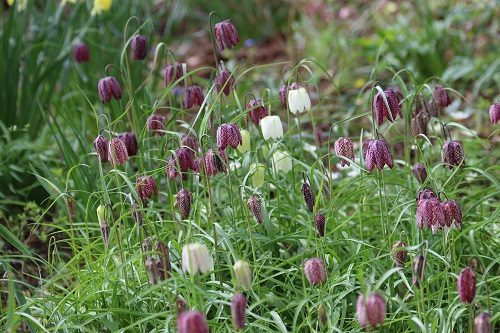 We also get a few pale purple ones. 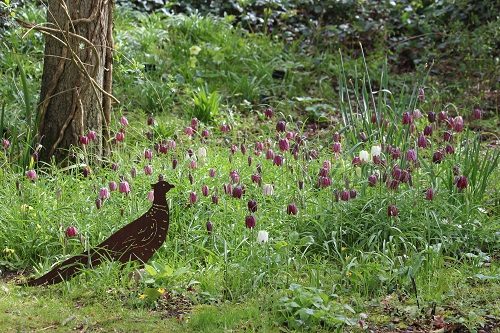 Rusty pheasant has done a good job so far.

No 4 are the wood anemones, Anemone nemerosa, which are spreading beautifully in the woodland.

They have made a lovely patch in amongst the fritillaries.

no 5 are masses of different narcissus which are evrywhere. 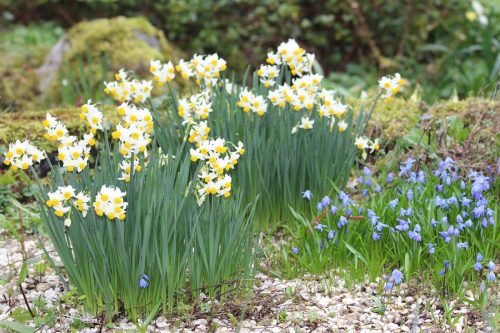 Two more plants that look well together and are increasing nicely. Scilla siberica is now seeding everywhere, in the scree bed and the rockery either side. The tiny narcissus bulbs are multiplying by themselves. 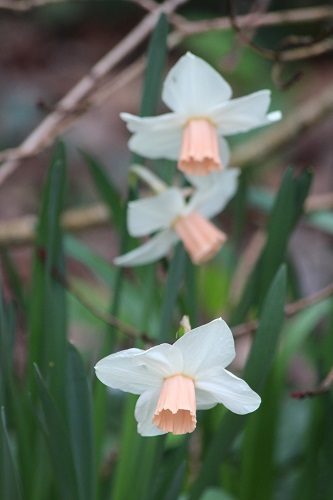 By themselves in a corner of the back garden is Narcissus Mrs. Backhouse. She looks so pretty by herself, I must buy some more to keep her company. I wasn’t too sure of the colouring when I first bought the bulbs, but now, on aquaintance, I really like her. 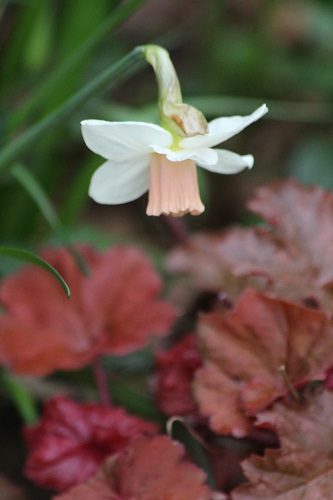 Mrs. Backhouse complements the colour of Heuchera Rio in front of it. 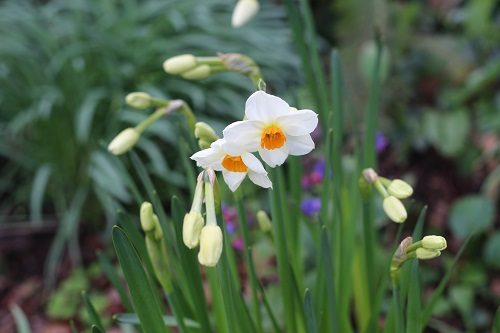 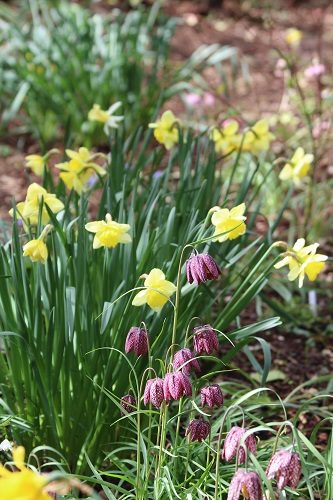 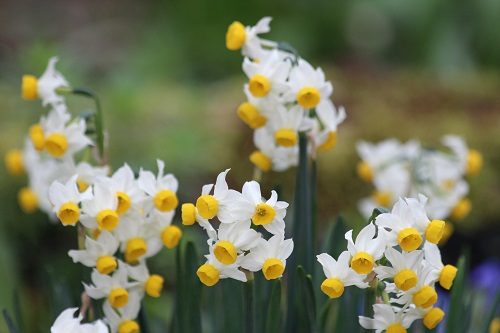 Such a tiny flower on this narcissus, I think it might be Silver Chimes, but what a fantastic perfume! 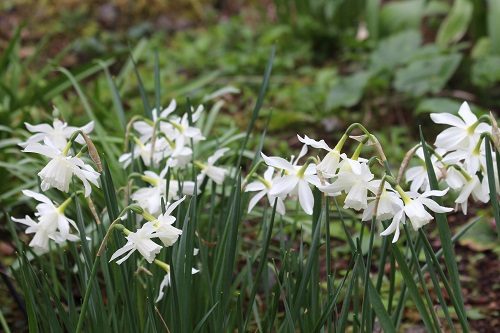 N. Thalia is increasing nicely round the garden.

No 6 are the Scillas which are making themselves at home on the scree and beyond! 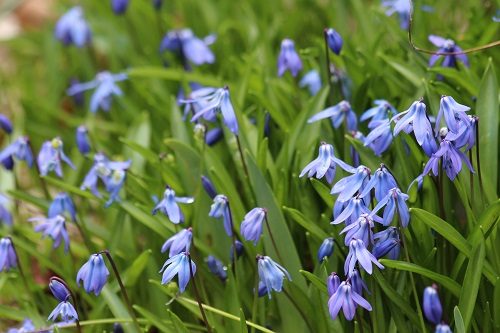 They are so happy that they are seeding everywhere!

No 7 are the Leucojum aestivum which are increasing nicely and now need splitting again. 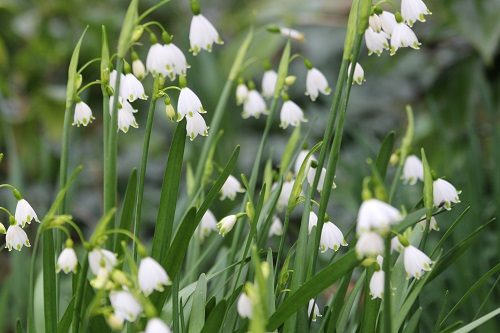 I have quite a few clumps of the so called summer snowflake, Leucojum aestivum, in the woodland. They increase very quickly and I think my clumps can do with being split again, more drifts forming. 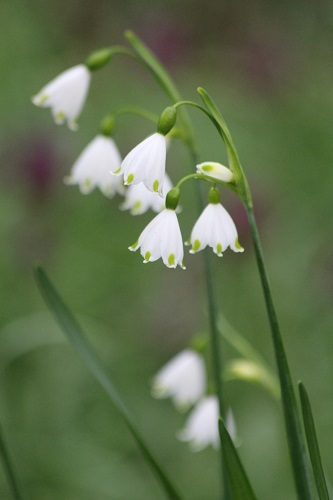 In the damper end of the woodland, the flowers are twice as tall as the ones at the drier end.

no 8 is the Corydalis on the side of the ditch. 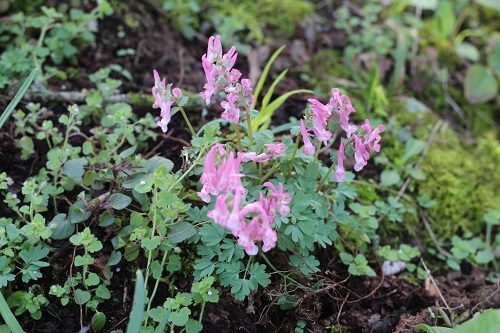 Corydalis solida which has established itself on the slope down to the ditch in front of the woodland, it is seedling about happily. 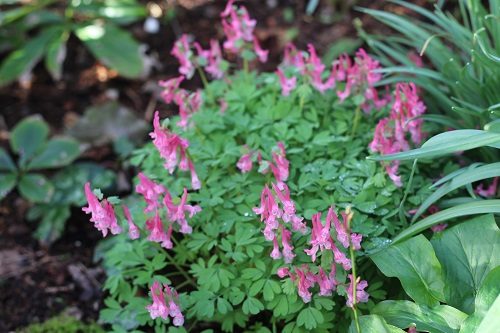 But the seedlings are coming up in different colours!

No 9 is the first of my Acers to come into leaf and flower. 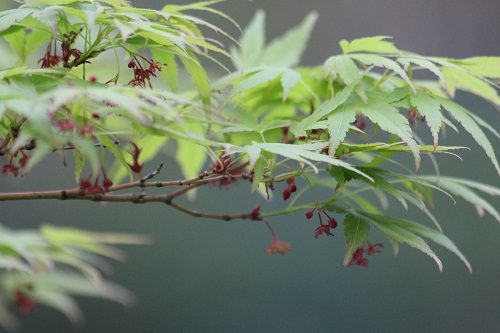 The red flowers are ever so tiny on Acer Sango Kaku.

And last at no 10 is the Chaenomeles by the back door. 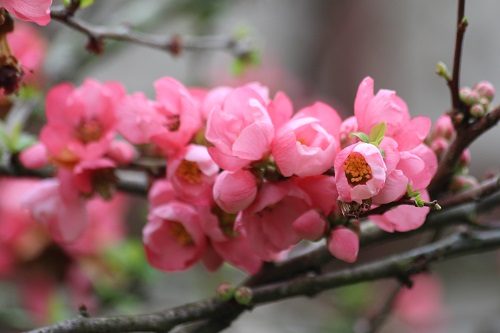 I can’t leave out the Chaenomeles, this has been flowering non stop since November, it is a really wonderful plant and I’m so glad the previous people planted it.

There we have it, the 10 families of flowers that are brightening up our dull March weather. Every day something new opens up at this time of year, it is so worth it to go for a wander round the garden each day.

This entry was posted in News and tagged March blossom, March bulbs, March flowers, Planting in drifts. Bookmark the permalink.

18 Responses to 10 families flowering on Saturday.