What a difference a month makes. GBBD September.

Looking back at last months offering for GBBD, I can’t help but notice the difference between the garden now and a month ago. Now there are leaves falling everywhere, making the garden look very autumnal, they are mainly horse chestnut leaves, but also oak leaves, which are usually the last to drop around Christmas time.

We first saw Hedychium, quite a few years ago,  growing in the wild when we were on holiday in Madeira. They were growing up in the mountains, in a shaded valley and looked absolutely stunning  with beautiful yellow flowers. Ever since then I have been meaning to try growing one and when I saw one called “Stephen” I just couldn’t resist, I wonder who might have a son called Stephen? The perfume is wonderful, no wonder it is called the Ginger Lily!

Hardy Fuchsia Delta Sarah is such a large flowered fuchsia for a hardy one. I have taken a few cuttings of this one so as to have it in other areas of the garden.

Perovskia, I must take cuttings of this before I move it. It is spreading too far and outgrowing its space.

Tritonia used to be a member of the Crocosmia family, but is now on its own, I wish it didn’t flop so much!

Campanula poscharskyana is still flowering. I pulled all the flower stalks out a while ago, but it just doesn’t want to give up.

Cyclamen hederifolium just keep getting better each day.More and more flowers are popping up all over the shady part of the garden.

Hydrangers have just about survived the drought which we had last month, although now the flower heads are starting to change colour.

Seedling of Angelica gigas, I must cut the flower heads off as soon as the flowers are over, otherwise I’ll have far too many seedlings growing in the border.

Roses are still doing well, this one is Golden Wedding.

Rosa The Dark Lady has flowered on and off all summer and still has more buds to come.

I can’t remember the name of this lovely rose, but I like it’s simplicity

Verbena bonariensis is still waiting for the butterflies to arrive.

White buddleja is also waiting for the butterflies that we usually have at this time of year.

Zantedeschia aethiopica has just put up another flower spike, much smaller than earlier ones, it must think it is early summer!

Salvia Amistad, such a beautiful blue. 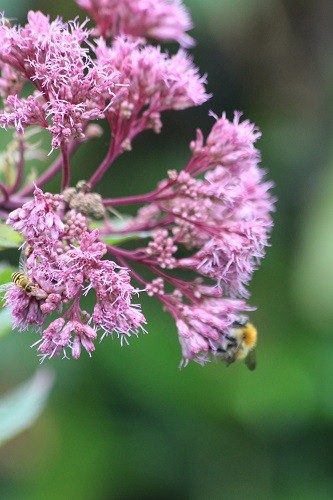 Eupatorum purpureum atropurpureum, the flowers are a lot smaller this year, because of the lack of rain.

I’ll finish with my Eucomis which is now standing up straight and isn’t banana shaped any more, it certainly has a magnificent flower spike.

A tiny Allium on the alpine scree.

A small Aster in the border by the field.

Sedum just behind the small Aster.

Miscanthus sinensis Malepartus flowering in the border round the dead oak.

Golden Rod by the field.

Physostegia by the dead oak.

There are still flowers to come, not in the same numbers as in previous months obviously, but enough to keep the interest going for a while. We have had thunder and lightning recently and quite a few spells of rain over the last week and the garden is looking a lot better for it.

Thanks must go each month to Carol at May Dreams Gardens for hosting this meme for GBBD, please pay her a visit to see other flowers from around the world.

24 Responses to What a difference a month makes. GBBD September.